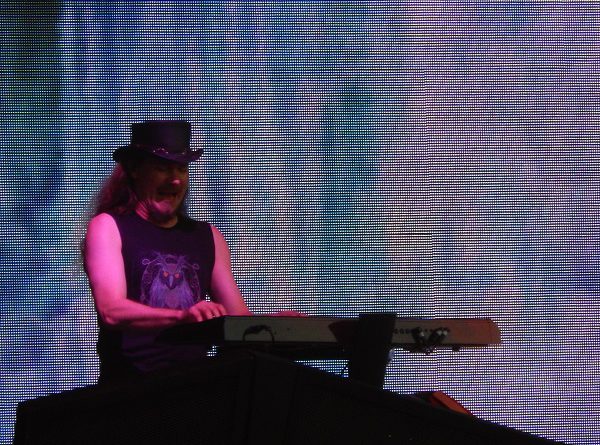 Hardline: Hi Tuomas, it’s a pleasure to meet you, thank you that it worked. I have some questions about influences …. For example in th esong „The Carpenter“ you have these oriental influence, the scales, the music and the instruments ….

Tuomas: Jasmin, thank you for taking your time, also for me a pleasure! That’s right. Yeah “The Carpenter”, it’s the story of Jesus Christ, because my songwriting is always based on the theme or the story first. I can’t just start playing, okay, this sounds nice, so what could this be about. It’s always the other way round. I wanted to write a song about this legend of Jesus. So I thought, how do I write it. It ended up being “The Carpenter” and since the subject’s matter is what it is, I thought it would be relevant to add an oriental touch. The same thing with the other songs where we have these oriental or egyptian vibes. We have a song called “Tutankhamen”, there’s one called “The Pharao Sails to Orion”, “Sahara”.

Hardline: “Whoever Brings the Night”, too.

Hardline: It was Emppu, who wrote it.

Tuomas: Emppu wrote the music for it, yeah. Whenever you want to tell stories, like these, you want to take the music and the melodies to that part of the world as well, and use those scales. So it emphasizes the storytelling. I’m not familiar at all with the music of those cultures – I just hear the melodies in my head and it instantly takes me to the Mediterranean or Egypt or wherever neee nee neee (starts to hum an oriental melody).

Hardline: Yes, it’s pretty obvious! There are many songs actually for Nightwish that you wrote which have this oriental touch, more or less present, like you mentioned, “Tutankhamen”, or “The Pharao Sails to Orion”, and also the lyrics talk more or less about these subjects. Where do you get the inspiration to do these songs, because Finland is quite far away from the Arabic world and the Middle East!

Tuomas: Well, you’re just so interested about the world, the stories, and different cultures and in what people believe and like actual history as well. Like “Tutankhamen”, what an incredible finding that was. I just think, what did Howard Carter think when he actually opened the tomb for the first time and saw all those artifacts in there. Just the idea that this kind of event has actually happened in the history of mankind just fills me with awe and excitement and inspiration to write a song which ended up being “Tutankhamen”. When you think about the story and the setting, you are in Egypt and you don’t want to do an acoustic ballad which goes in a major key. You want to somehow reflect that event. So that’s how the melodies occur. It’s also the constant drive of a song maker or of   artists of any kind to search for things that you don’t know about, to go somewhere unknown. Discover new stuff that you can use in your art and that’s what I’m trying to do. You know, I never want to do the same songs twice. You always want to challenge yourself and then dive deep into the different cultures and take some influences from there.

Hardline: It’s not very long that there are metal bands coming up in the Middle East, too, like in Israel, Orphaned Land for example.

Tuomas: There’s one Tunisian band too …

Tuomas: Myrath! Yeah! I like their stuff a lot! Isn’t it a bit dangerous in their culture?!

Hardline: Chen said that metal is a means to unite people, because there are a lot of conflicts and metal helps.

Hardline: And to play music at all?! I don’t know?

Tuomas: Probably not even this, yeah.

Hardline: So I try to talk with European bands like you, Nightwish, and Amorphis and Orphaned Land, which are known worldwide and of which the music is listened to by the fans in the Orient as well as in the Occident. There’s a real cultural exchange via your music. With the songs by Amorphis, it’s a bit different than in the songs that you write for Nightwish, because they combine for example the Finnish Kalevala with oriental music. They do this often, but not always.

Tuomas: They do! And they do it brilliantly! Even though their lyrics have absolutely nothing to do with that part of the world there.

Hardline: To come back to the song “The Carpenter”, a song that fascinates me particularly, because as you said, it’s about Jesus Christ as the historic person who was kind of a carpenter, and you add this oriental vibe and music. I find very interesting the time when you wrote the song, because it was on the edge to the new millennium. I wondered how, why, this came up in your mind, because in an earlier interview you said that this song is still special to you because it  expresses how you were at the time?

Tuomas: I remember how I was. I was nineteen when I wrote that song and I was in many ways a different person. In many ways the same. But back then I was still more of a believer than a skeptic and now things have turned other way round and it’s just human nature, it’s human evolution. You change the more you start to study things, read facts, read, search, you come closer to the truth and sometimes truth can be … even a bit disappointing, but it can be very illuminating as well. I remember that kid that wrote that song, who was still a believer. This kid was writing this song about his relationship with this maybe historical figure and not really knowing what to think about it … so it’s not a praising song.

Hardline: There is also a lot of doubt in it.

Tuomas: There is a lot of doubt! Well, I’m called Tuomas, Tuomas the Doubter that’s why. But that’s what I meant when I said like this song is important to me, because it reflects what I was back then. Then I look at myself now and I like what I became in a different way.

Hardline: There are a lot of musicians and authors who started – at the turn of the millennium – writing about the apocalypse or the question of mankind, its end. Well, the historical figure Jesus Christ promised to change the world and to bring salvation, so it was kind of interesting to re-read the lyrics of “The Carpenter” with this context in mind. So, did you have this doubt about the new millennium at the time?

Tuomas: The more I’ve grown and the more I read, the more optimistic I am. I really am optimistic about the future of mankind, because superstition is going down year by year and knowledge is everywhere. Now we have this thing called the Google machine and if someone makes a ridiculous claim, you can instantly go like this (tapping on his phone) and find a lot of evidence that it’s not so. This wasn’t the case twenty or thirty years ago. Now information is flowing. For example – what is, would be the best way to cure North Korea? Get them Internet with unlimited access. So, it’s all about education, information and it’s all there. People are better educated all the time and that’s what’s gonna take us to victory. We just need to take care –

Hardline: Victory? Of whom? Mankind against … stupidity?

Tuomas: Yeah! Superstition, stupidity, arrogance, the exploitation of the natural ressources, over population, all these real threats. But I do have – once more – a strong faith in human kind.

Hardline: This knowledge came with the years, though. So with nineteen years old, you didn’t know.

Tuomas: Yes, I had a different mindset back then. Slightly. I’ve always been a doubter. I’ve never been a firm believer of almost anything. These days, I still keep my mind open. Not so open that my brain falls out, as somebody says.

Hardline: That explains the hat.

Tuomas: That’s why I wear the hat. So it stays there.

Hardline: Well, other songs, like “The Siren”, I find it quite interesting that when Tarja sings these very seductive parts, that you add the oriental music and when Marco sings, it’s much more heavy and much more aggressive.

Tuomas: Again. It’s just one of those things. When you write a song things click together. They sound right to you.

Hardline: That’s easy for you to say as a composer.

Tuomas: Yes, I don’t know how it happens, but things just happen. I’m a strong believer in a flow of mind. So they come and … it feels perfect.

Hardline: Yes, cool! Yes, it fits, it works quite nicely.

Hardline: So, why don’t you play it on this tour?

Tuomas: There are so many songs so you have to pick and choose. We did “The Siren” a few times with Floor in the previous tour, so it’s … maybe we’ll bring it back. I like the song.

Hardline: Another very old song is “The Pharao Sails to Orion”. Like you already said you had these ideas of the discoveries in Egypt and you combine it with the Greek mythology.

Tuomas: I just love stories. Different cultures. History. All that. So whenever I read an interesting fact or story, often I have to use it in one of the songs one way or another. That’s where all these come from. 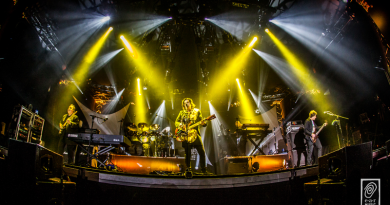 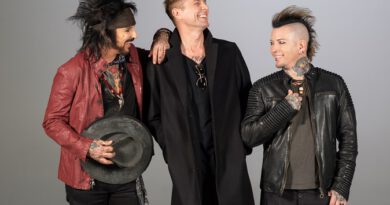 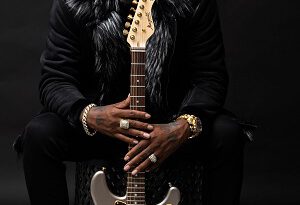